Essays on American civil war are some of the most completed on assignment writing services. Since the war was a long and a brutal struggle between the south and the north of the United States, research papers focus on specific aspects of the conflict. Online writing services can do your paper on any section or event of the war. Andersonville prison is one of the infamous sites that might be featured in a custom written paper. You can ask for an essay on Andersonville prison on this online assignment writing services. Short urgent essays due in three to eight or 24 hours can be written and delivered quickly. other essays will also be completed flawlesly in time. Ask for an experienced writer by ordering a paper  online and writers here will gladly do your paper. 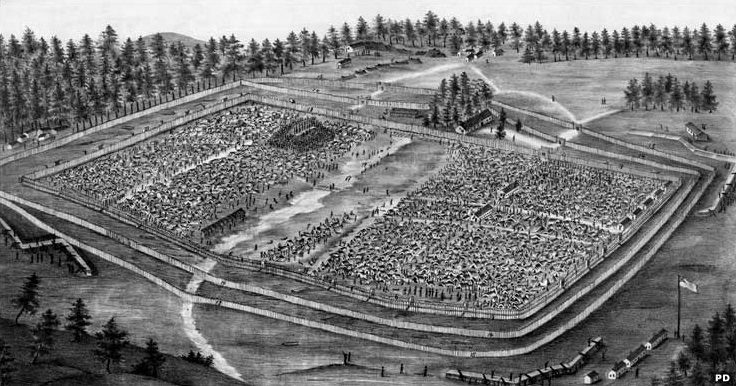 Andersonville Prison:  Infamous for atrocities in the American Civil War

Andersonville prison is remembered as one of the most notorious confinements of prisoners of war due to the inhumane conditions that characterized it. The prison was established in early 1864, and lasted up to 1865. It was established in Macon County, next to the town of Andersonville. The confederate prison under the command of Major Henry Wirz was officially known as Camp Sumter. Andersonville prison was started to take up the large number of captured union prisoners that were in and around Richmond in Virginia. The camp was meant to accommodate 10,000 people but as of August 1864, it accommodated approximately 33,000 prisoners. The camp received an estimated total of 400 prisoners every day.  For the 14 months that the prison existed, it hosted a total of 45, 000 prisoners, of which approximately 13,000 died as a result of poor sanitation, diseases, overcrowding, and malnutrition. The prison gained a bad reputation due to its conditions and notorious atrocities that were inflicted on the captured union troops.

The prison was established as a confinement of captured troops who awaited an exchange process. The location in which the prison was situated was chosen since it was a distance from the frontlines, possessed relative immunity from the raids carried out by the Union Cavalry and was easily accessible due to the railroads that passed through the town. The prison location also had a good water source. Captain Richard Winder was, therefore, sent to design and oversee the construction of the prison. He designed a prison that would accommodate 10,000 prisoners on a 16.5 acre compound. Captain Winder used the local slaves to help in building the walls of the compound. The walls were built using tightly-fitted logs that created a stockade wall that barred any view of the outside world. The stockade was accessed through two large gates that were set in the west wall. Inside the prison compound, there was also a light fence around 19-25 feet from the main wall. The fence was meant to prevent prisoners from moving near the stockade. Anybody caught crossing the light fence was shot immediately.

As from February 1864, the camp started receiving prisoners. The population of the prisoners grew steadily since 400 prisoners were received each day. By the end of June 1864, approximately 26,000 people were penned in an area that was supposed to accommodate 10,000 prisoners. The population of prisoners grew rapidly due to the suspension of exchange of prisoners by President Lincoln and Lieutenant General Ulysses Grant. The abnormal population led to Major Henry Wirz authorization of the expansion of the prison. A ten-acre expansion was constructed by the prisoners within two weeks. Despite the expansion, the conditions in the prison continued to deteriorate as more prisoners continued to be brought. Conditions in the camp became worse as the men suffered malnutrition and illnesses such as dysentery and cholera.

Water source for the prison had been polluted resulting in epidemics that claimed approximately 3,000 lives each day.   The bodies of the prisoners were buried outside the stockade in a mass grave. Notorious prisoners, christened raiders, who would steal food and other valuables from fellow prisoners, complicated life inside the Andersonville prison further. Presence of raiders led to the emergence of a second group known as “regulators.” The regulators would capture the raiders who would then be put on trial. There were varied forms of punishments meted out to the raiders, which included hanging.

Meanwhile, the opposition troops led by Major General William Sherman moved towards Atlanta. The steady move of the soldiers prompted General John Winder to command Major Wirz to construct earthworks barriers around the Andersonville prison. Sherman troops eventually captured the city, though the earthwork defenses were not constructed, since the prisoners were moved to a new facility in Millen, Georgia. Sherman troops later moved towards the Savannah, and some approximately 5,000 prisoners were taken back to Camp Sumter The population of the prisoners in the camp remained 5,000 until the end of the war in 1865.

After the end of the war, Captain Wirz and Officer James Duncan were arrested. Wirz was arrested for supposed murder of soldiers that had been incarcerated in Andersonville prison. Major Wirz, a victim of circumstances was tried and charged with conspiring with, injuring and murdering the confederate prisoners, and violation of laws on war. Wirz was, therefore, sentenced to death. Duncan, on the other hand, was sentenced to 15 years in jail, although he only served one year. Wirz was hanged on 10th November, 1865 in Old Capitol prison in Washington.

Andersonville was closed immediately after the end of the war in June 1865. There are prisoners who opted to remain in the federal service while most went back to civilian occupations that they practiced before the war. The site of Andersonville prison is now the property of Federal government, and serves as a historic site.