There are many religions in the world through which the faithful and avid followers pledge their allegiance to. Among them is the Grogon religion. This religious faction believes to have come into existence in the beginning of time. Grogon religion is a monotheistic religion. There is an omnipotent supernatural being called Kranos Grogonus, who is believed to have a split personality. Kranos personality is split into a benevolent and a malevolent side. Kranos is believed to have inherited magic from his mother, a sorcerer god, who was exiled by his father after defying his orders. When Kranos came of age, there was a fierce battle in Azkatheus, the dwelling place of the gods. Kranos mother through sorcery tricked him into killing his father. She meant for the bad personality to be temporal. However, overcome by grief at what he had done, Kranos fled. The mother was unable to reverse the effects of the sorcery and thus he lived on with a split personality. The Grogons refer to his good side as Occius and his bad side as Unnius. While as Occius, he created a haven and followers after discovering he had his mother’s powers. As Unnius, he fights and condemns the spirits out to avenge his father. He also takes out his rage on his unfaithful followers.

Cronus(Kronos) as depicted by Greeks 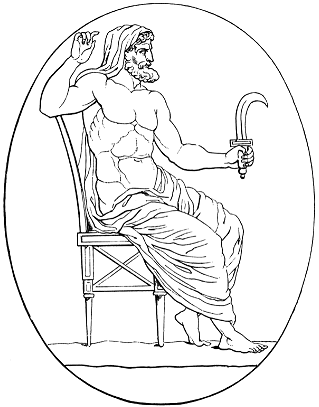 Throughout their existence, the Grogons have practiced various beliefs that were passed down generations from their ancestors. First and foremost, it is believed that life is a gift from Occius. Hence, at birth, it was customary to raise the child and chant a thanksgiving prayer to Occius. Death was viewed as Unnius’ way of punishing those who failed to adhere to his orders. The Grogons believe that the spirit of the righteous once dead are paraded before Occius, and are rewarded depending on the extent of their righteousness. Those that please him are rewarded by being reincarnated so that they could live once more in service to him. The souls that displease him are left to Unnius, who casts them away into other dimensions, which are inhabited by malevolent gods who imprison them and do with them as they wish.

Grogons believe that Kranos was a good god like his father was, but was corrupted by his mother. As a result, while as Occius, some of his wisdom and love was passed on to man. On the other hand, Unnius too passed on his wickedness to man. Thus, the Grogons believe that man possesses the knowledge to differentiate right and wrong and practice free will. It is thus through this ideology that man is judged regarding the choices he makes.

When one is born, the religion is passed on to them as long as both parents are believers. In case an outsider may want to convert to this religion, he or she has to perform a sanctification ritual, which involves prayers from the religious leaders, slaughtering of a lamb not more than 2 months old and washing one’s hands in its blood. The lamb signifies purity and the blood washes off internal filth acquired from other beliefs. Any person of any nationality or ethnic decent is eligible to become a Grogon as long as they perform the sanctification ritual. However, children are exempted until they are in their teenage years, where it is then mandatory for them to be consecrated.

The aim of the church of Grogon is to gather multitudes of followers and perpetuate it doctrines and beliefs throughout the globe. Grogons believe in harmonious existence, keeping in mind that kindness is often repaid by kindness. Thus, the deeds of an individual will determine the kind of karma that befalls him or her. It is also in this same regard that one is reincarnated by Occius or cast way into damnation by Unnius.