An essay on variability of human movements

In Kinesiology, variability is one of the most prominent features of human movement. Variability in human movement is considered a normal variation that takes place during motor performance across task repetitions.  This variability is inherent and can be observed with much ease in all biological systems.  When individuals attempt to carry out similar movements more than once, the consequent movements or actions may be similar to the previous actions or movements, but they are never identical.  In the recent past, the role played by movement variability during motor control has been a subject of many studies that have sought to provide answers to questions concerning variability and movement. Indeed, several studies have, from a myriad of perspectives, explored the variability in motor movement and generated a number of theories that offer some explanation to this variation. Two of the most common motor movement theories are the dynamical systems theory (DS) and the generalized motor program theory (GMP).  Even though these theories share some similarities, they also differ from each other in more ways than one.

An illustration of neuroplasticity 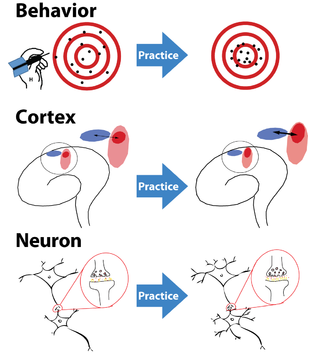 In 1975, Richard Schmidt developed a new theory that sought to explain the motor movements.  Schmidt’s theory was influenced by his recognition that the then contemporary theories had numerous deficiencies in their explanation of motor movements. In particular, Schmidt did not concur with Adams’s theory which stated that a separate program was required for every variation of a particular movement of skill.   This was because this theory implied the existence of numerous programs for all the possible movements and this in turn implied the existence of novelty and storage problems.  Schmidt instead proposed that every unique expression of a movement or a skill did not require a separate motor program but that the motor program is more general in nature and is adaptable in a myriad of different ways in which the movement of skill might be executed. Schmidt hypothesized that a motor program is actually generalized to represent an entire class of movements that are similar or skill variations. He then christened this single motor program a generalized motor program and stated that the GMP could be modified to generate various outcomes.  According to the GMP theory, before movement can occur, the stimulus identification stage occurs and it is at this stage where the GMP for the required action is selected.  This GMP is then retrieved from the individual’s long term memory and the motor program is prepared for initiation. The preparation stage entails defining the processes required to execute the movement and these may entail information on the limb that is to be used, the amount of strength required, the direction of movement, and how fast to execute the program, among other details. Once these parameters have been selected, the movement can now be initiated and executed according to the selected set of parameters.

Just as was the case with the development of the GMP theory, the DS theory was also developed due to perceived weaknesses in the then existing theories that sought to explain motor movements. In particular, the dynamic systems theory arose because of the perceived weaknesses with cognitive based theories with regards to their explanation that the central nervous system, specifically the cortical areas of the brain, controlled body movements without any assistance or influence from other significant control agents. Nocolai Bernstein (1896-1966) was one of the scientists that faulted this notion and developed an alternative theory that, contrary to cognitive theories, recognized human movements as resulting from the interaction of numerous systems and subsystems, including both environmental and biological systems, which are interdependent, connected and adapting (Schilling, Song & Vondracek, 2012).  Bernstein’s ideas and observations were similar to those of the DS theory but they lacked a larger theoretical context within which they could be explained and from which new ideas could be both developed and tested. The DS theory provides this framework as observed in the way the notions of the DS theory are presently applied by movement scientists working across a broad range of sub-disciplinary areas.

Both the DS and the GMP theories consider a state of decreased variability as a state that results from an efficient carrying out of a specific movement pattern but the theories differ in their consideration of the variability in movement. According to the GMP theory, the variation that occurs during a pattern of movements takes place due to errors in one’s ability to foretell proper parameters to use during the execution of the general motor program (Howle 2002). This therefore implies that in order to optimize the efficiency and accuracy of the pattern during movement,   the errors within the control structure have to be eliminated on a constant basis.  For better performance therefore, one has to practice a task in a specific manner because doing so increases the predictability and therefore the stability of the task.  This notion however goes against the fact that improvement in motion is better improved through variation of movement. Conversely, the DS theory does not consider variability as an error but instead considers it as a source of change in movement behavior.

Another similarity between the DS theory and the GMP theory is that they both are unable to explain the occurrence of certain behavioral characteristics that seem stable but can occur in a myriad of ways. This is mostly observed in the behavior of musician and sports personalities who may possess the same skills as other individuals but appear to have developed a number of different ways of performing the same task.   The rich variety with which individuals perform the same tasks contributes to the stable behavioral state of the individuals. Consequently, this implies that, contrary to the views of both the DS and the GMP theories, variability does not reduce when individuals become stable in the execution of certain behavioral patterns but that it actually increases.

Even though both the DS and the GMP theories consider that increased variability in a movement pattern indicates a lesser degree of stability and that a higher degree of stability is demonstrated by decreased variability, the DS theory emphasizes on the transitions between movement behaviors.  Particularly, the DS theory states that biological systems alter their movement behavior up to a certain critical point where the system becomes both very variable and unstable. When the system reaches this specific critical point, variability both increases and dominates the movement system as new movements are introduced.  The increased variability at this critical point makes the system highly unstable and these forces the system to change newer behavioral states that are stable.  The DS theory proposes that a system that is deficient of movement variability is one that is inflexible and rigid and therefore one that has a limited ability with regards to switching its behavior and adapting to the dynamic demands of the environment.  An example of an incidence where the DS theory can be used to explain the change in movement occurs when an individual gradually increases his walking speed and eventually begins to run.  When the individual is walking slowly, the individual’s movement is considered stable, but as his speed increases, his walking movement becomes increasingly unstable until the individual reaches a critical point where he can no longer be stable unless he changes his movement to running.  The new movement, running, results in a more stability compared to his movement while at the critical point. The aforementioned example illustrates how the DS theory offers insight and a higher degree of understanding of the transitions that take place between behavioral states. The DS theory’s recognition of the importance of variability in movement has made many developmental theorists to recognize it as hypothetical starting point in the study of cognitive skills, perceptions and developmental actions.

It is without doubt that the DS and the GMP are the most prominent theories of motor movement. Even though these theories have some similarities, there are even more differences between them.  As has been explored in this essay, the main differences between these theories lie in the way each theory explains the factors that influence the motor control instructions and how they consider the linearity of alterations in movement behavior.