Paper on Gender Discrimination in China 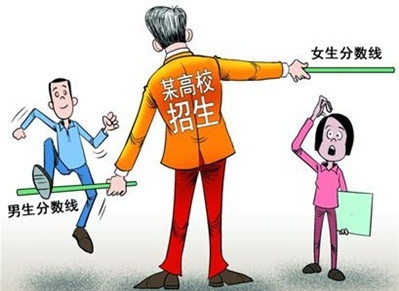 Gender discrimination is a social vice that is affecting so many societies in the world. The paper examines China and its impact on the same issue. Nowadays, the range of career options of women is becoming wider worldwide; however, the gender discrimination still exists in some Asian areas, especially China, where majority of female college graduates face the sexual discrimination while job-hunting. Usually in media we often hear that many companies ask only for male applicants and refuse to interview female applicants. Because of that, a large number of women in China cannot choose jobs depending on their intention and have limited career options. This phenomenon exists for a number of reasons. First, the traditional concept exists in Chinese people’s minds from ancient time to the present. Second, the physical limitation makes some abilities of female workers not as good as male workers. Third, many of female applicants in job-hunting always suffer from social pressure which is also the main factor causing gender discrimination.

The physical limitation that exist and that affect women in the society has affected women in china for a very long time. It is interesting that the society has made up processes and procedures that would make women have a hard time in finding work and even working in a regular labor market. It is noted that through Cagatay’s theory, it is suggested that women be at a higher chance of suffering under neoliberal economic policies through differently economic policies that have been implemented. The systems would include the deflationary bias from government budget cuts, male breadwinner bias in wage employment, and commodification bias (Wang 10). The systems that operate within this lines would make women more vulnerable to losing their jobs than men and are less protected by society from safety nets that exist within a job setting. The education setting is no different in encouraging the discrimination of women in the market. Women are required to score grades that are a bit higher than the male counterparts in entrance examinations for certain jobs. Different organizations would rather have employ women not because of their expertise but because they are a cheaper work force compared to their male counterparts. The market is a trap for the women, and there is underpayment in every section. When the ministry of education is questioned about the education standards and their contribution to the gender discrimination, their answers are always in defense of the system that the practice is based on national interests. It is interesting that the women find it very difficult to find work after graduation. This is attributed to the fact that about twenty three percent of different companies have preferences on gender in their ads for jobs. It is interesting that statistics show that women are preferred in sales and clerical positions unlike men who would be preferred for managerial and white collar jobs. Age is another factor that is limiting the working experience for women. The employees have had the notion that women at the age of thirty five and above will be considered as not flexible enough and the fact that at this age they have families hence their demands would be higher thus cutting them from the work (Wang 13).

Traditional concepts are another factor to consider in the analysis of gender discrimination in the workforce of china. The market is filled with the notion of the ideas of the ‘male providers’ notion. It is in the sense that workers and employees are of the belief that women are never the breadwinner of the family. That is to say that the employees would pay less for the women in the workforce, unlike the males. An attributed that has been in the traditions of the society for quite some time that the society is not ready to accept that women can also be bread providers in the community. Employees would look at the marriage of the women more than that of the male counterparts. A fact that is considered traditionally as being that women are known traditionally to be caring and family oriented. A factor that to employees would hamper their survival tactics and their commitment to the company as the employees would have preferred. The fact that the society has had this notion that women are only wired into being mothers and nothing more is misplaced, and a wrong nothing that is out to discriminate on the women in the working environment (Liu 30).

Social pressures can best be described as systems and notion that are in play in the society to direct the way issues are viewed and controlled in its functions. It is a factor that has also contributed to the discrimination of women in the work environment. China has certain laws that are out to “protect” women but in some sense they are contributing to the discrimination of the women workers in the society. An example of these rules would be the labor law with a specification to the regulations on the scope of prohibited labor for female workers. In so many words, these laws bar women from engaging in any physically demanding jobs that are considered as men sectors of work or that would not be physically suited for them (Bauer 32). In simple terms, it is trying to dictate that there are some differences that exist between women and men and also trying to encourage the thought that women are in so many ways not wired to carry out certain functions. That is to say that the society expects nothing more than what they are considering the level that is best suited for women. In line of thinking in this manner would mean that the community is fighting the progress that women are making into being treated fairly and equally in the market. It is interesting to note that the kind of discrimination is not limited to the workspace only. It extends to the education sector and the interviews that the ladies are put through. They are expected to perform a little higher than the males and in the same time they are also made to take jobs that would be paying less after graduation unlike the male counterparts who would earn higher. They are given a hard time from the time they graduate (Bauer 35).

The work force of China is perhaps the most technological advance in the world. The technological niche that their country has managed to attain is considered to be the most advanced in the whole world. It is sad however that the market would be biased about gender issues and yet they have such advanced technology and good understanding of the market. The women who make it in this market have experienced some of the toughest situations to be that successful in this environment. Should the country ever want to continue to be this successful and better than the fight for gender disparity has to consider traditions, society pressure and the physical limitations that women are facing in the market.