A research paper on diffusion process of the major global religions

1. What is religion, & what role does it play in culture? 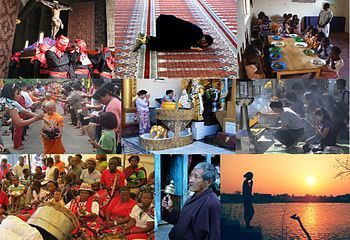 This is a custom written ESL paper that  simply answers questions by an instructor on worlds religion from this assignment writing service. As it stands, religion is a concept that is so difficult to define. Religion can be defined as a set of beliefs, feelings, dogmas and practices that define the relations between human being and sacred or divinity (atheisme). We see religion in the worship of the souls of ancestors who are thought to inhabit natural objects such as mountains; this made them believe that some living persons possess special abilities given unto them by supernatural powers. In some places, societies are infused with religion that tradition influences strongly behaviors through rituals and some practices which are common. Rituals mark certain events which are viewed to be of significant importance to the society; birth and death, attainment of childhood, or marriage. They are expressed at regular intervals as is done in Christianity, Islam, Jewish world, and other religious world. Although these beliefs influence many societies, religion, at least in its organized form, has less significant in the lives of people. It is so for most European countries where religion has less significant in people lives today. This was not the case in their history of Europe where Christian churches dominated political, cultural, and economic arena.

2. Where did the world’s major religions originate, and how do religions diffuse?

Throughout human history, all religions were either animistic, polytheistic, or both. It was until 3500 years ago; however, a monotheistic religion developed in Southwest Asia called Zoroastrianism. The 500 BCE saw four religion and philosophy being developed in the world. From the hearth of South Asia Hinduism was developed it is ranked third in the world after Christianity and Islam as a world religion. It has its origins in the Indus River Valley of what today part of Pakistan (Fouberg et al 209). From there it migrated to the Ganges River and diffused throughout South Asia and into Southeast Asia before the advent of Christianity. It first attaches itself to traditional faiths and then slowly replaced them. Given its current characters as an ethnic religion its geographical extent is relatively small. Buddhism splinted from Hinduism. After Budda’s death, the faith grew rather slowly until Asoka became a convert. He sent missionaries to carry Buddha’s teachings. Buddhism spread as far as Sri Lanka and later advanced towards Mediterranean and north into Tibet, and east into China, Korea. Like Christianity and Islam Buddhism changed as it grew and diffused, and now the religion is strongly regional with different religions. The beginning of Tuoism are not clear, but it can be traced to an older contemporary of Confucius, Lao-Tsu who published a volume titled Tao-te-ching,or “Book of the way”. Confucianism diffused early into the Korean Peninsula, Japan and Southeast Asia, where it long influenced the practice of Buddhism. Diffusion of Chinese religions eve in China has been tempered by the government of China in an attempt to suppress religion in the country. Judaism grew out of the belief system of the Jews. The Jews scatted after the Roman destruction of Jerusalem. Those who went north into Central Europe came to be known as Ashkenazim, and those who went across North Africa are called Sephardim. While adherents to Judaism live across the world, many Jews have moved to Israel since its establishment. We can trace back Christianity to the hearth in the Mediterranean. Christianity stems from a single founder, in this case Jesus (Fouberg et al 219). The dissemination of Christianity occurred as a result of expansion combined with relocation diffusion. The worldwide diffusion occurred during the era of European colonialism . Islam is the youngest of the major religions; it can be traced back to a single founder who is Muhammad (Fouberg et al 220). At Muhammad death, he and his followers had converted Kings on the Arabian Peninsula to Islam. Using his armies the king spread the good news and faith across the Arabian Peninsula through invasion and conquest. Islam diffused throughout North Africa, including Egypt to Morocco, a caliphate occupying most of Spain and Portugal, and the Middle East. Today Islam is ranked second to Christianity in global number of adherent. And it is the fastest growing of the world’s major religions (Fouberg et al 221). Migration played a major role in the diffusion of religions, both universalizing and ethnic (Fouberg et al 224).

3. How is religion seen in the cultural landscape?

Cultural landscapes with different houses for worship; Cemeteries for different religions are dotted with different symbols; and services provided to religious who have visited the sacred places. The studies of religion are on pilgrimage and how much impact it places on religion, culture, environment, and its followers. Adherents of a religion may define its sacred place out of fear or reverence. According to human history sacred places were features in the physical geographical landscapes. Recently as universalizing religions diffused across the world, sacred sites were altered or abandoned (Fouberg et al 224). Physical features remain sacred to religious groups. Access to and use of such places is constrained either by private ownership, environmental concern or as public recreation site.

4. What role does religion play in political conflicts?

History and religious beliefs can bitterly divide people of the same ethics or language group. Such division arises not only between people; adhering to different major religions such as what was observed in the former Yugoslavia (Muslim and Christianity), but this division and conflicts can be observed in the same religion. Our world has come across the most destructive conflicts brought about by the division in the same religion such as Muslim and fellow Muslims (Fouberg et al 226). This kind of conflicts mostly involve more than just difference in spiritual beliefs and practice but are majorly a function of politics and cultural differences. An example is the conflict that erupted between Muslims and Hindus in India. This was purely a result of political as well as cultural difference and religion serves as the principal symbol around which conflicts were organized.